How to Explain Being Fired: 3 Examples 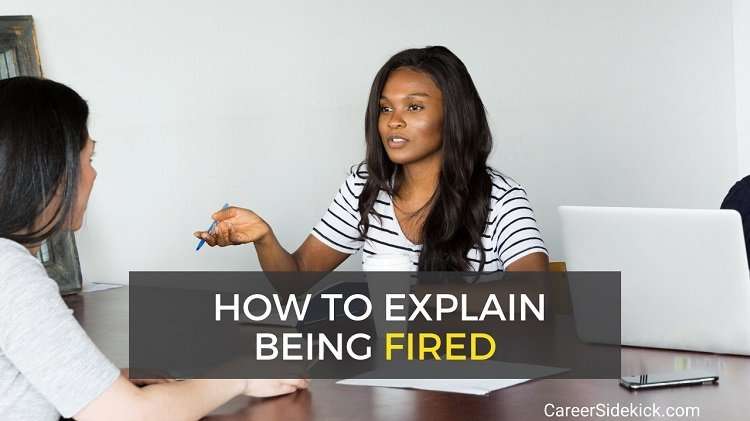 Finding a new job after getting fired can be stressful, but it is doable. I’ve helped multiple people do this as a recruiter, and I’ve done it myself early in my career.

So in this article, I’m going to walk you through:

After reading this article, you’ll know how to create the perfect job interview answer for your situation.

Should You Lie After Being Fired for Performance or Misconduct?

I don’t recommend lying in your job interviews… even if you were fired. Here’s why you might NOT want to lie:

First, hiring managers and interviewers appreciate someone being upfront and direct. If you explain the reason you were fired in the right way, they may not hold it against you! And you’ll earn their respect for telling the truth and being clear in your answer.

Next, employers often conduct background checks and/or talk to references. And while the receptionist at your last employer is very unlikely to say anything specific about why your employment was terminated (to protect the company from a lawsuit), it’s still possible that someone could say something.

And if an employer suspects that your last job was terminated for a specific reason, they’ll almost always ask to talk to your previous manager as one of your references. Your manager won’t give every detail, but they may say something to indicate you were terminated and not laid off. And if you lied, you’ll be caught!

So now let’s look at some good ways to explain why you were fired in your job search.

First, we’ll look at being fired for performance-related issues, and then for misconduct.

How to Explain Being Fired for Performance – Examples

When explaining why you were fired for performance, it’s important to be upfront and direct, and not try to avoid the question. You should acknowledge that you didn’t perform as well as you were expected to, and then show that you learned from the experience and give an example of how you’ve taken actions to ensure that it doesn’t happen again.

“I was let go from my past position because I wasn’t hitting the sales goals consistently. I was learning and improving each month, but I just didn’t get up to the full quota fast enough. They usually hire people with sales experience and decided to hire me without any prior experience in the field, and I felt like I just didn’t have quite enough time to become as good as I could have, potentially. I did learn a lot from the situation. I learned the basics of how to sell on the phone and in-person, and I learned how to handle the frequent ups and downs of being in a sales role with quotas to hit each week. While I am now looking to leave sales and work in customer service, I think the skills I’ve learned – like being a great listener, communicating clearly, and coming to work with positive energy and enthusiasm each day, will serve me well in this customer service position that I’ve applied for with your company.”

It’s okay to explain the situation and talk about factors that led to the termination; just make sure you don’t sound like you’re refusing to take any responsibility.

If you place 100% of the blame on the employer, the interviewer will worry that you didn’t learn anything from the experience.

However, it’s okay to explain why you felt you didn’t have the best chance to succeed, or why you feel it wasn’t entirely your fault. But you should still accept some of the responsibility, and you should never badmouth the company by saying something like, “the job was horrible and the employer didn’t train me at all.”

Even if that’s true, you’re better off saying it more softly, like in this next sample answer…

Here’s another example of what you could say in the job interview:

“I was let go from my past position because I wasn’t hitting the sales goals consistently after two months. I think a few factors led to this. The training felt scattered, and the hiring manager who brought me into the team quit two weeks after I joined. So while I tried my best to get up to speed, it just didn’t feel like the best environment to be learning a brand new role. It took the company a month to find a new manager for the team, so I didn’t even have a direct manager for the first month. Unfortunately, I was let go for performance issues before I had a chance to really get comfortable in the role. I should have done a better job of asking teammates for help in the absence of a formal manager. And I learned from the experience – I know I need to take more initiative and take responsibility for my own learning in my career. However, I think the situation wasn’t ideal, either. So that’s what led to my termination.”

How to Explain Being Fired for Misconduct – Examples

If you were fired for misconduct, it’s important to show the employer that you won’t have the same issues in your next job. So the best way to explain being fired is to say you made a mistake and you learned from it, and then give an example of how used the experience to improve and grow as a professional.

Sample answer if you were terminated for misconduct:

“The company had a policy of not using cellphones while on the job. I was going through a family issue at home, so I was occasionally checking my phone. My manager found out and told me that the company had a zero-tolerance policy because they have a lot of proprietary info that they need to be careful to protect. Unfortunately, I lost my job from that mistake. I learned from the experience, though. I realize now that I should have talked to my manager ahead of time about what was going on. He could have helped me find a solution while also staying in-line with company policies. From the experience, I learned how important communication is, and I’ve learned to be more upfront and direct. I understand that company policies exist for a reason, and I will handle this type of situation differently in the future – by communicating directly with my manager.”

Phrasing your answer like this will show them that you take responsibility, that you learned from the experience, and that you’ll make sure it doesn’t happen again.

So this is how I recommend addressing being fired for misconduct in your job search and particularly in the interview.

More tips on how to give good interview answers: 11 smart ways to answer interview questions

Laid Off vs. Fired: Know the Difference

When using the advice above, make sure you understand the difference between being fired and being laid off.

Being fired is when the company terminated your employment because of a situation specific to you. It could be due to performance, misconduct, a violation of company policies, coming in late, or something else.

No matter what happened, they terminated your employment due to something specific that happened. They’re not eliminating your position from the organization; they’re just deciding that it’s not a good fit to keep you employed in the role.

On the other hand, a layoff is when the company strategically eliminates or outsources your position (and possibly other positions in the group/department)… and they’re not going to hire someone to fill your spot after you’re gone.

So that’s the difference between being laid off versus being fired from a company.

This could cost you the job if this next employer runs a background check or reference check.

However, only you can make the final decision. You wouldn’t be the first person to say, “My position was eliminated,” when you were actually fired.

There’s some risk to lying, but there’s also some risk to telling the truth in your interview (the hiring manager may not like your explanation and decide it’s too risky to hire you). So you’ll have to decide what YOU’RE comfortable with. I’m here to share advice and share the pro’s and con’s, but the final decision is yours.

Also, don’t say it was a mutual decision if it wasn’t…

While working as a recruiter, I had a few job seekers tell me that the reason they left their last job is that both sides decided that it wasn’t working out. They said it was a mutual decision between them and the employer.

This isn’t very believable, because it’s not something that occurs often. So you’re going to receive immediate doubt from a recruiter or hiring manager if you say this.

So… even if you do decide to tell a “white lie” or stretch the truth when you explain why you were fired, I do not recommend saying that you and the employer both decided that it wasn’t working out (unless this is truly what happened).

If you say it, be ready to back it up.

If you read everything above, then you now know how to explain being fired for performance or misconduct, and you’ve seen examples of how a good answer should sound.

To recap: If you are clear and direct when explaining the reason you were fired, and if you show you learned from the experience and have taken actions to make sure it never happens again, then you’ll give yourself the best possible chance at getting hired for a new job.

If you decide that the reason you were fired is too damaging to reveal, then you can consider telling a “white lie” to slightly change the reason.

You can also tell a much bigger lie like, “my previous job was eliminated due to layoffs.”

I do not recommend lying like this, though, for reasons mentioned throughout the article. However, it is an option available to you, and only you can decide if it is worth the risk.

It may be worth trying if you were terminated for a serious misconduct issue, or if you’re trying to explain being fired for poor performance and you’ve failed many interviews in the past when telling the truth.

Every job search scenario is different. Every reason for being fired is slightly different, and there isn’t one perfect approach for how to explain it to employers.

You should consider the advice and sample interview answers above, but you need to make the final decision on what you’re comfortable with.

One final word of caution:

If you lie during an interview and the employer finds out later, you can still be terminated from your new job. Lying during the hiring process (on your resume, in the interview, etc.) is grounds for termination at any time if they discover it. They may never find out, but it’s a risk that you need to weigh.

For more help, here are more general tips for how to get a job after being fired.

The post How to Explain Being Fired: 3 Examples appeared first on Career Sidekick.