How to Answer “Are You a Leader or Follower?” (Interview Question) 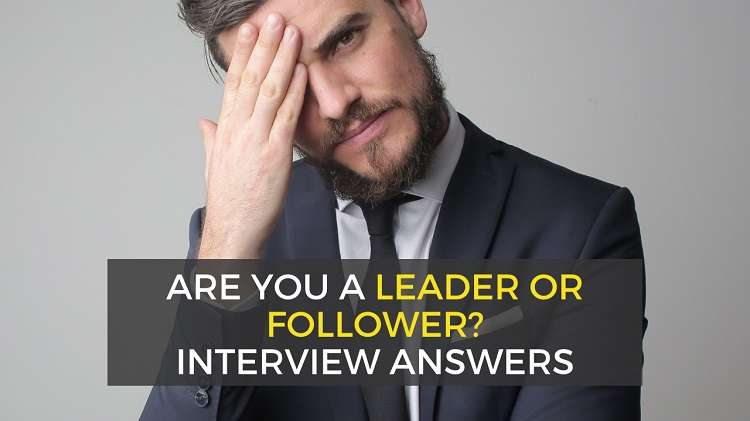 Don’t get caught off-guard next time an employer asks you, “Are you a leader or a follower?”

There are a couple of key things they’re looking for, and one particular reason they’re asking!

So in this article, I’m going to explain how to give the best possible answer based on my experience as a recruiter.

Why Employers Ask this Question

The question of whether you’re more of a leader or follower is tricky and it’s not always clear why the interviewer is asking.

In general, though, they’re asking this interview question with their particular job requirements in mind! They want to figure out if you’ll fit into the role.

Will you be able to do what’s expected of you?

Will you enjoy the role and be likely to stay?

These are the types of things every hiring manager is looking for in an interview, especially when they ask a question like this.

So the bottom line is: They’re asking because they want to know if you’ll fit with the role and with the team.

That means you need to do one important thing: Never go into an interview without reviewing the job description and knowing what the company wants! (The job description is the single best place to see what the employer is looking for in someone they hire).

Think About What Type of Job You’re Interviewing For

Ask yourself – does this job involve more leading or following? What type of traits does the employer seem to want?

Or, do they likely want someone who is both a leader and follower? Will you be in charge at times and following someone else at other times? That’s often the case. Even if a job leans more in one direction, employers will appreciate if you’re able to be both a leader or a follower depending on the situation.

Of course, you never want to dodge interview questions or give an answer that avoids the topic (for example, when they ask, “What’s your greatest weakness?” they want to hear a REAL weakness).

However, in this case, it’s okay to say that you’re comfortable in either scenario – as a follower or leader.

Sample Answers to “Are You a Leader or a Follower?”

I play both roles well. I love to lead projects and teams. In my last position, I spearheaded two large projects taking 12 months in total and bringing our company $104,000 in revenue. I had 15 people reporting to me for those projects. However, I’m also able to follow someone’ else’s lead when necessary. I’ve assisted on projects where I wasn’t the leader, and I knew that trying to be a second leader would only disrupt the team and work. I think that by recognizing what’s needed based on the situation and my role, I’m able to decide how to best use my leadership abilities. Overall, I’m very comfortable leading, though, and it’s something I’m eager to do more of in my career. I saw on the job description that this position would be leading a team of six and possibly hiring a couple of more people as the group expands, and that’s something that excited me a lot about the job!

I enjoy being a leader and I think it’s what I’m best at naturally. However, I also look for opportunities to learn and follow those who have more experience than me. I love asking questions to learn from my managers and more senior team members, and I love having a chance to collaborate with others. I’ve found that’s a great way to learn. So I enjoy leading, but I also love working with a strong team and having great mentors to follow. That’s one reason I was attracted to this position. I saw on the job description that I’d be collaborating with a number of different departments and team leaders along with leading a small team of my own.

As mentioned earlier, if you’re unsure of what the interviewer wants for their job, you can say you’re good at both leading and following, like in those examples we just covered.

However, if you’re confident that the job requires one particular skill set over the other (for example, if you’re interviewing for a Senior Director position where you’ll be overseeing a team of 10), you can be more precise in your answer…

I prefer to lead at work. That’s where I feel I excel, and that’s why I got into management in the first place. I also enjoy mentoring and teaching my team and helping them develop. So I think that being in leadership plays to my greatest strengths, and I find it rewarding, too.

However, it’s still a good idea to show you’re not afraid to do some hands-on work. You could end your answer by saying, “I’m not afraid to get my hands dirty though! I’ve found that sometimes, the best way to lead is to work hands-on alongside the team when necessary”.

Use your best judgment, and decide the best answer based on the role you’re interviewing for.

If the job seems mostly focused on situations where you’ll be leading, you need to show that as a strength. If you’re mostly going to be following someone else’s lead, show that you can thrive in that type of situation.

Also, I’d be careful about saying you only prefer to follow unless you’re 100% certain that the company doesn’t expect any leadership from you now or in the future (which is extremely rare!) Most employers will want someone who’s comfortable taking initiative, even if it’s just to lead a project, speak up when they spot a problem, speak up in a meeting, etc.

Those are all forms of leading… even if you’re not managing a team. And those are all traits that the majority of interviewers and employers will appreciate.

Conclusion (And How to Practice at Home)

Finally, practice your answer at home to make sure you’re delivering your response the way that you want! You can practice in a mirror or by recording your voice with your smartphone and then playing it back.

Recording your voice and playing it back is a good idea for all interview questions. If you do this, you may realize you sound different than you think. And you’ll be able to adjust your tone, how fast you’re talking, and more.

Remember that the best answers to, “Are you a leader or a follower?” will take into account the role you’re interviewing for and show the employer that you’re a good fit for their exact needs!

Always think about the job you’re discussing before responding, and you’ll be able to give a better answer.

And if a job requires both leading and following, don’t be afraid to say, “I’m strong in both areas” (And then back it up with an example or two!)

No matter how you respond, make sure you sound confident. This isn’t a question where you want to say, “I don’t know.”

The post How to Answer “Are You a Leader or Follower?” (Interview Question) appeared first on Career Sidekick.